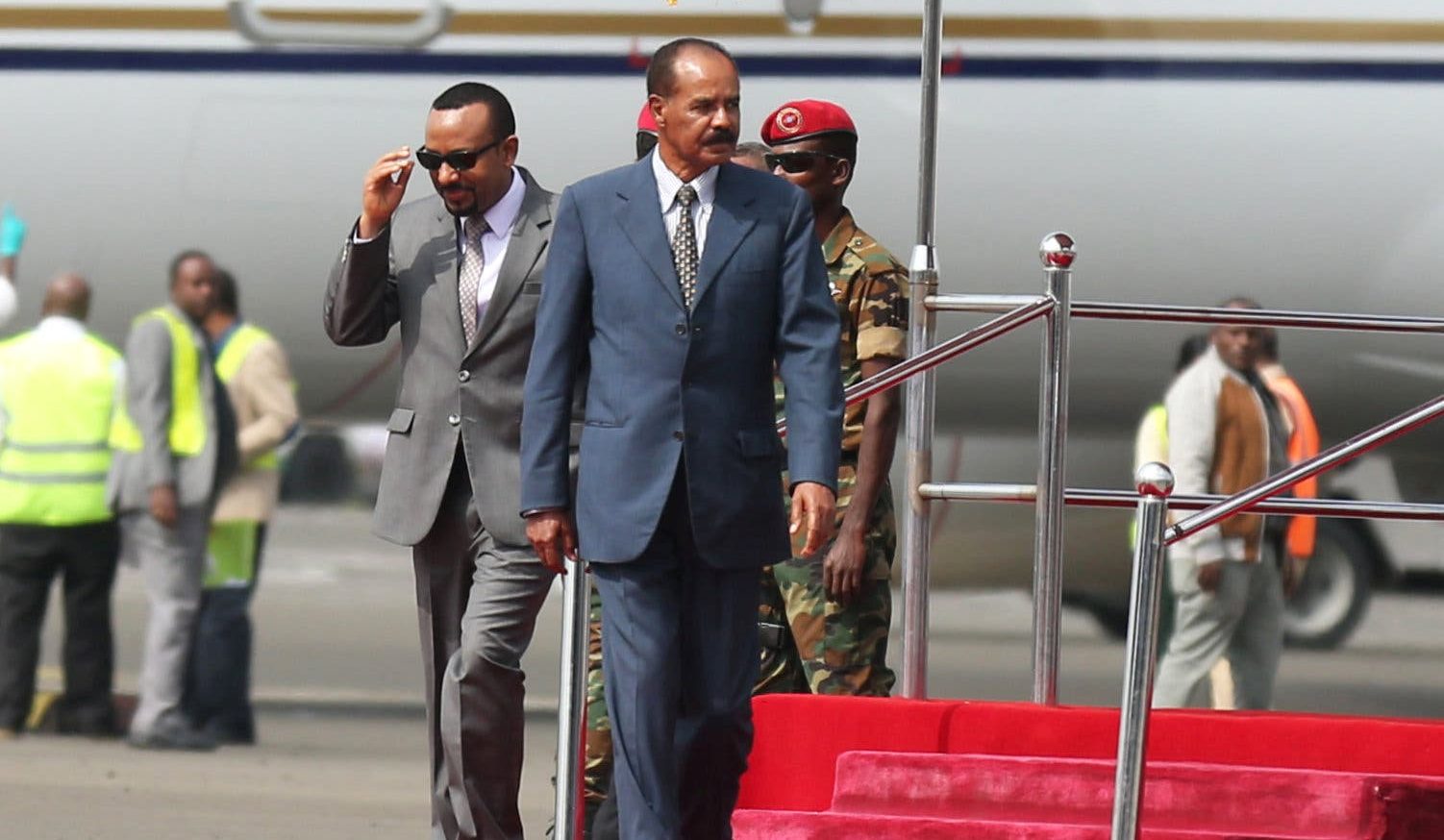 From our Correspondent
Saba Makeda
Somewhere in Eritrea, 21 ottobre 2020

From the 12th to 15th of October 2020, President Isaias Afworki was on an official visit to Ethiopia. Yemane Gebremeskel, the Eritrean Minister of Information, announced the President’s travel on the 12th of October as a working visit to consult and discuss “…bilateral ties as well as the consolidation of regional cooperation. Mr Yemane Twitted that: “President Isaias Afworki and his delegation were accorded warm welcome by the Prime Minister Abiy Ahmed on arrival at Jimma Abajifar Airport, earlier in the day.”

This Eritrean trip follows the Ethiopian Prime Minister’s (PM), Abiy Ahmed, travel to Eritrea in July when the PM visited Eritrea’s SAWA military training camp1. Abiy’s presence in Sawa normalises it as a military facility. Such normalisation of SAWA is unfortunate; it ignores its role in the perpetuation of human rights abuses as well as entrenching the never-ending National Service both critical reasons for the flight of the Eritrean youth.

During the three days, President Isaias Afworki has visited a coffee plantation and the University in Jimma, the Grand Ethiopian Renaissance Dam (GERD)iv; Gibe-III hydropower plant (on the Omo River), the Ethio-Engineering Group, the Ethiopian Air Force, and the newly inaugurated Entoto Natural Park.

This visit, like all previous visits between the two leaders, is notable for the fact that neither the Eritrean people nor the Ethiopian people have any idea as to what “bilateral and regional issues” the two leaders are discussing or resolving.

Eritreans are bewildered and disgusted at the royalvi and obsequious treatment that PM Abiy is conferring on President Isaias whenever he is in Ethiopia. They also point out that, since 2018, Isaias has inaugurated more projects and visited more Universities in Ethiopia than he has in twenty-nine years in Eritrea. As President Isaias admires the capacity of the Ethiopian airforce, we remember that Brigadier General Habtemariam, the man responsible for re-building the Eritrean airforce from scratch, is in prison for fifteen years now. And like so many prisoners, the whereabouts of Brigadier General Habtemariam is not known.

As Eritreans, the Eritrean Government’s shuttle diplomacy, facilitated by the UAE who have provided the Government with a Boing 737ix, is a cause for concern and further bewilderment. Though the Government has access to an airplane, it has made no effort to evacuate Eritrean citizens stranded in Ethiopia because of COVID 19. There is no report of President Isaias even meeting with such citizens in Ethiopia. The information from Addis Ababa is that Eritreans wishing to repatriate are required to register with the Eritrean Embassy and pay USD 300. They are also required to pay for their fourteen days quarantine upon arrival in Eritrea. As many Eritrean citizens cannot afford the costs, they are now begging in the streets of Addis Ababa.

The Ethiopians are equally bewildered, disgusted, and disconcerted as to the behaviour and the relationship of President Isais and their Prime Minister Abiy Ahmed. They are also puzzled by the total lack of progress and transparency of the Ethiopia Eritrea peace process. The Ethiopian media and media analyst, like the Eritreans, are asking what the purpose of President Isaias multiple trips to Ethiopia is. The media colleagues in Ethiopia (Abbay Media; Ethio360media) ask why a person who cannot manage his own country, who has closed Asmara University is travelling to Ethiopia to visit Universities and industrial parks. They point out that President Isaias has transformed Eritrea into prison and a land of the aged from which the youth are fleeing.

The Ethiopian journalists and media commentators describe the performance of the two leaders as an act for the benefit of the cameras. Still, in the end, there is no improvement in the lives of the Ethiopian and Eritrean people. The border between Eritrea and Ethiopia remains closed, and the two people are not able to work and move freely between their respective countries. And Ethiopia continues to host Eritrean refugees. Ethiopians, like Eritreans, do not see that any benefit has accrued to them as a result of the Ethiopia Eritrea peace process.

The relationships between the Ethiopian Prime Minister and the Eritrean President is interpreted based on the fact that both Abiy Ahmed and Isaias Afworki are un-elected leaders of their respective countries whose common enemy is the Tigray People Liberation Front (TPLF).

Abiy Ahmed became Prime Minister of Ethiopia, on the 2nd of April 2018, following a leadership contest within the Ethiopian People’s Revolutionary Democratic Front (EPRDF). The House of Representatives confirmed his position in the expectation of general elections in August 2020. By the end of 2019, the Prime Minister had transformed the EPRDF into the Prosperity Party. This transformation is a cause of tension between the PM and the founders of the EPRDF, included the Tigray People’s Liberation Front (TPLF). The tension between Addis Ababa and Mekelle heightened further when the August general election, was postponed to 2021. Since 2018 the Eritrean Government has adopted an increasingly hard line against Tigray and the TPLF. It identifies the TPLF as a critical stumbling block to peace between Eritrea and Ethiopia. The Ethiopian people have not elected Abiy Ahmed. In Eritrea, Isaias Afworki has been in power for twenty-nine years, and the country has not had a general election.

Finally, since the 2018 peace accord, the leaders of Ethiopia and Eritrea have met frequently. But, the peace agreement is not progressing, the legitimacy of PM Abiy and President Isaias is, increasingly, questioned. And, neither the Eritreans nor the Ethiopians have any idea of what their leaders are discussing.