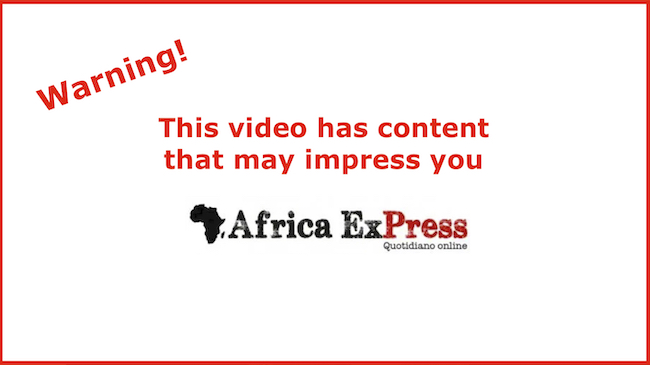 First beaten and then killed by Kalashnikov of the Mozambican Armed Forces (FADM). It is the tragic end of a woman, anonymous, crossed by men in uniform on the R698 road in Cabo Delgado, northern province of Mozambique.

The video, sent to Africa ExPress from one of our Mozambican sources, bears witness to the terrible death of the poor woman live. Less than two minutes – brutal – that are horrifying. An example of gratuitous violence and unimaginable and unacceptable ferocity. This is the photograph of what is happening in Cabo Delgado.

Some men in uniforms and machine guns see the woman naked. She is alone. They yell at her and one of them forces her to stop. She is afraid – who wouldn’t be? – she is confused. She stretches her step along the edge of a road. She is probably fleeing the clash between jihadists and the Mozambican armed forces. One of the soldiers with a red backpack and a stick runs towards her and reaches her with a thrashing.

The woman tries desperately to protect herself with her arms but more blows arrive on her face, on her head, on her belly, everywhere. She moves off the pavement to get away from the “herd” but the soldier keeps beating her while other men approach her screaming at her. There are four of them and a fifth film. One says: “She is one of al-Shebab”, referring to the jihadists raging in Cabo Delgado. 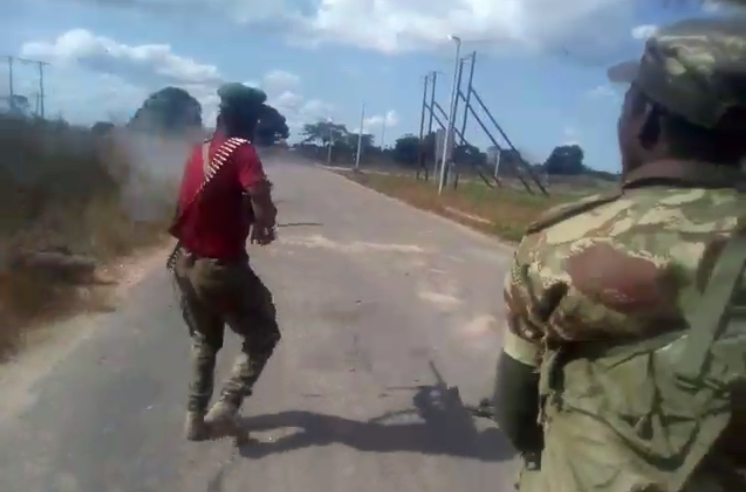 The cold execution of the woman

Then a close-range shot of Kalashnikov. The others, as if exalted by the first shooter, imitate him. The victim falls lifelessly onto the pavement. Unloading the Kalashnikov MK-47 and MPK machine guns on his poor lifeless body. For 36 times. One of the military shouts: “She’s a whore”. He is heard saying: “Enough”, but the shots continue. Another one says: “Done. We have killed one of the al-Shebab”. And on the way back the film shows at least a dozen soldiers. One of them, in the foreground, makes the “V” of “victory” with his fingers. As if one could call such an act cowardly.

The video is circulating on Mozambicans, arousing horror, disgust, anger, upset, between public opinion and civil society. The Mozambican Ministry of Defense called the images in the video “horrible” and denied that they could be military of the Armed Forces.

It seems difficult, however, in front of the analysis of the Crisis Evidence Lab of Amnesty International. According to the investigation, the soldiers were wearing FADM uniforms. The NGO report confirms that a soldier has the characteristic yellow and black badge on his shoulder, as seen in the image of Amnesty. In addition, most soldiers wear the full uniform, excluding the gunner with the PKM with the red T-shirt instead of the standard camouflage one.

The soldiers all speak Portuguese, the official language of Mozambique and therefore of its armed forces. Thanks to the analysis of the film, Amnesty also identified the place of the woman’s execution: Awassa, Cabo Delgado Not far from Mocimboa da Praia, elected place of the jihadist occupation. And it also shows a satellite map.

The video appeared for the first time on social media on September 14. But according to Amnesty International sources, “it was shared by smartphones on September 7, the day it was probably shot. Date that coincides with the government’s military operation to “clean up” the areas of Awasse and Diaca by jihadists. Then confirms the presence of the military FADM on site at that time.

Amnesty had already denounced the violation of human rights

Last week Amnesty published a report on the situation in the province of Cabo Delgado, denied by the Maputo government. In the report it denounced the attempted beheading, torture and other ill-treatment of prisoners and the dismemberment of alleged opposition fighters. But also mistreatment of the population, which is often considered as flanking jihadists.

The jihadist violence of al Sunna wa-Jama – called al-Shebab by the population – began in October 2017. According to ACLED jihadists have killed over 1,300 people and caused between 250 thousand and 368 thousand displaced persons. In Cabo Delgado it is now war. A war that the Mozambican Armed Forces cannot stop even with the air support of the Dyck Advisory Group’s mercenaries.

In the meantime, the young soldier who is doing the “V” of “victory” with his hand after the murder of the woman has died. His name was Ramiro Moises Machatine and he is the author of the video that has accused the Armed Forces and the Ministry of Defense of Mozambique. The Mozambican media are talking about murder. We will talk about it again.