On the 6th of April 2019, more than six months after her abduction, somebody turned on Silvia’s phone which was connected to a Kenyan Safaricom Company SIM card. They logged into Whatsapp and abandoned a work group chat that the twenty-three year old was part of with some of her friends. The other participants (5 people) received a message: “Silvia Romano has abandoned the group”. That African phone number now results as inexistent, the phone is turned off. But who had Silvia’s phone in their hands? Who is it that used it to abandon the group chat? Above all, why did this person make Silvia leave the Whatsapp account? This caused the deletion of all the vocal messages that Silvia had exchanged with her friends.

The twenty-three year old Italian volunteer had two Kenyan numbers and one Italian number. The Airtel number has expired, but, up until a few days before my arrival with my American colleague Hillary Duenas at the Malindi police station, Silvia’s phone had been seen on Inspector Peter Murithi’s desk who was then supposed to have given it to his colleagues in Nairobi who manage the Silvia Romano file. However, there is no trace of the telephone and sim card in the capital.
In Nairobi they pass the buck back. “ We don’t know anything about it…” states an employee at the training centre for investigators on Mombasa Road. “ …isn’t the phone in Malindi?

When Silvia was kidnapped, she left her phone in her room in Chakama in the unnamed 7 room guest house. During the following days the phone was given to the police in Malindi when they arrived to investigate the place. It contained a Safaricom sim card. But what had happened to the other two sim cards, the Airtel one and the Italian one?

Chakama is a small village. The phone line only works in some places. Silvia used that SIM card because it was cheaper than using Safaricom phone company. She used to find the spot where her phone would get some signal, so she could talk well enough.

The young volunteer bought her SIM card on November the 5th, as we know from the office’s file, after she landed in Mombassa airport. the Fatto Quotidiano newspaper tells us how nobody, either Italian or Kenyan, has verified this particular matter.

In Kenya you can use your phone as cash machine, something is not possible to do in Italy. You can send and receive money via an app called M-pesa (“pesa” means money). People use their phones to pay bills, restaurant bills, shopping in every store. Even in the smallest village in the African savannah like Chakama, ir is through phones that Silvia and other volunteers receive money to pay for staff, children’s school and to buy food. 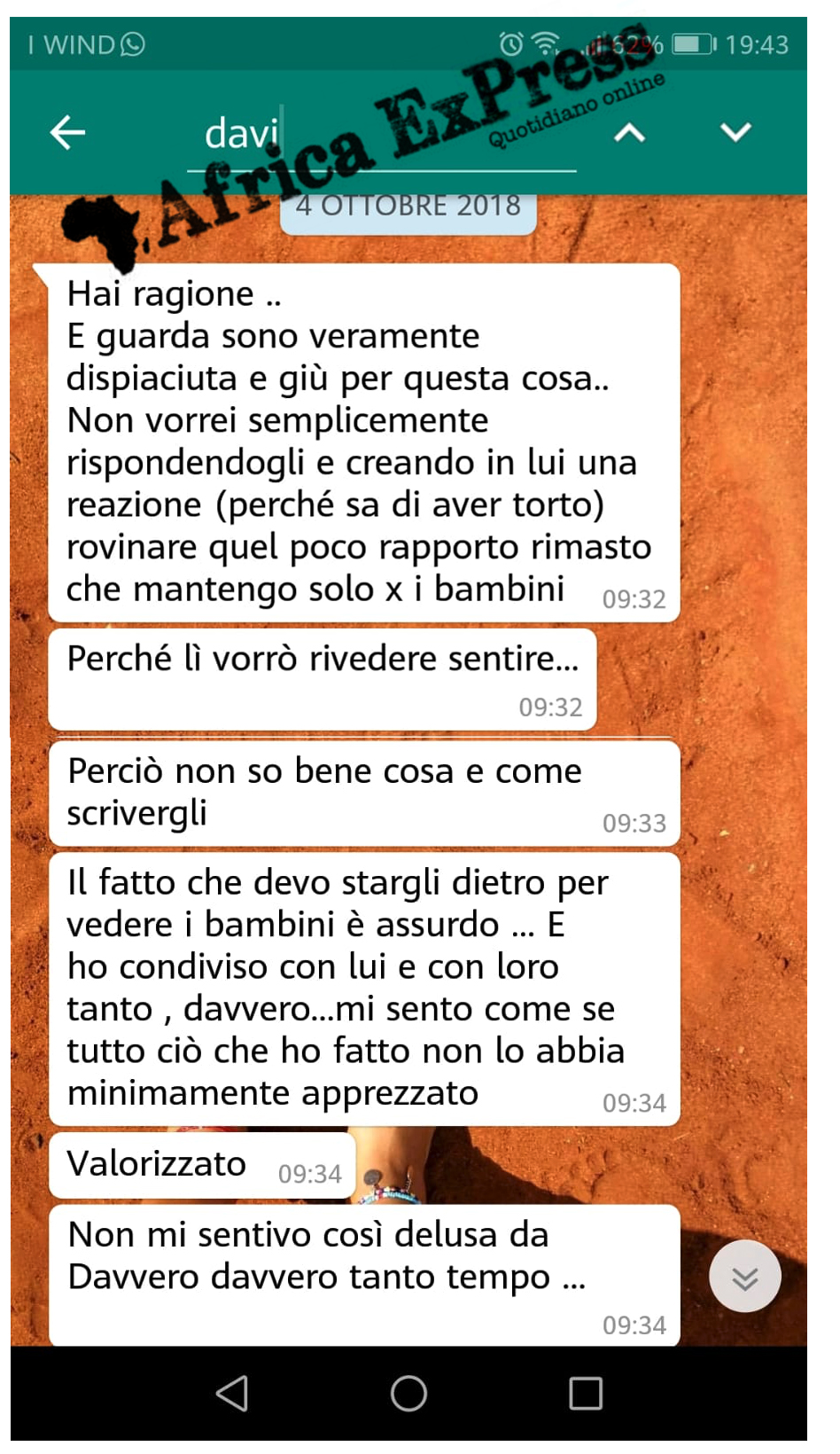 But some of the vocal messages Silvia used to send have been deleted whilst other messages are very clear. Silvia clearly critiqued Davide Ciarrapica, the man she went to volunteer for a year ago, in July 2018, at Hopes Dreams Rescue Sponsorship Centre.
The young volunteer sent this message: “the thought that he (Davide) is working so badly… wasting so much money, ruining this kids, because he is ruining them, he is deceiving them. He is making them living in a different world which is not those children’s world. When those children will leave the orphanage at eighteen years of age they will find a completely different lifestyle and this is wrong, it is so wrong for them. Davide is wasting so much money in bullshit instead of accommodating other kids, instead of doing new projects and this is torturing my head more every day, I am even doing some calculation, he has taken so much money from me and other volunteers, where the hell did the money went? He is such an unstable person. He, like others should not have a children’s home because he needs to sort himself out before solving other people’s problems”.

In order to stay at Davide’s children home, Silvia had to pay 10 euros a day, so in a month time that was 300 euros. Silvia also paid for some presents (she even bought a goat) but she was not happy with how the money from all the donation was managed. She also complained of Davide’s personality as being grumpy and short-tempered.
Davide always profusely thanked people who would make donations through his website or people who would bring presents there.

“I remember this couple who just got married, they arrived with some of their wedding presents and Davide thanked them so enthusiastically” Silvia’s friend reports. But for Silvia never a line, never a word. And she was very, very upset.

With contribution of
Hillary Duenas