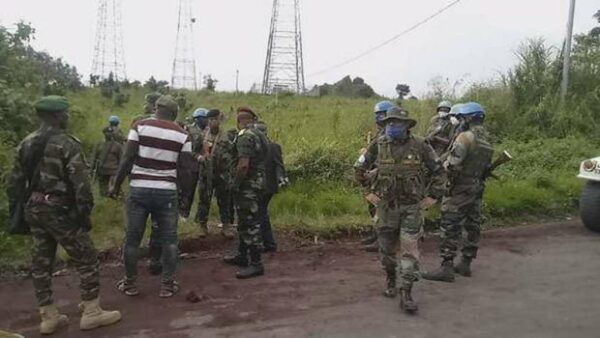 Congo’s Foreign Ministry was fully informed that Italian Ambassador Luca Attanasio and his bodyguard Vittorio Iacovacci were heading to Goma and, since they were going to Bukavu, would travel to the eastern part of the country. The Italian consul in Kinshasa, Alfredo Russo, was also with them.

A document obtained by Africa ExPress, and which we reproduce here, shows how our embassy had asked the Congolese authorities for diplomatic guarantees for its staff who were to embark at Kinshasa’s N’Djili airport. The note expressly requested the use of the airport’s diplomatic room and compliance with the Vienna Convention, according to which diplomats’ luggage should not be inspected. It is probable that our carabiniere’s weapons were to be placed in their suitcases. 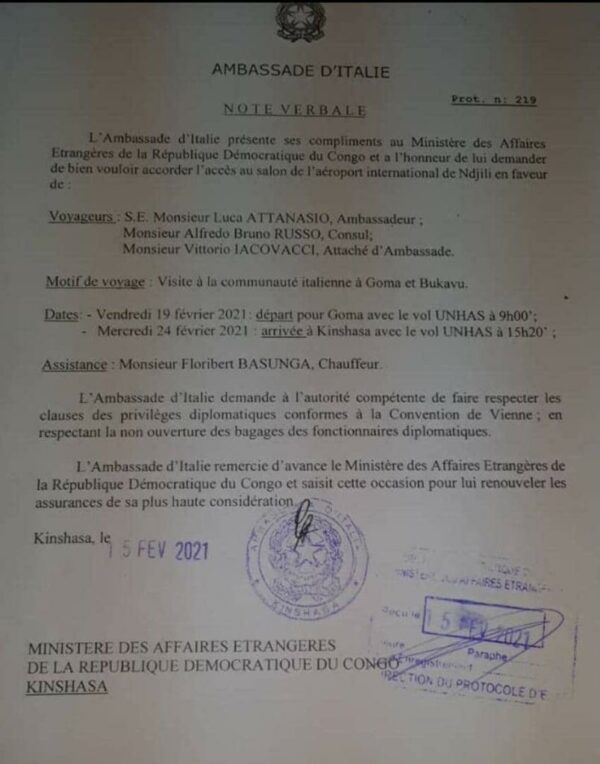 Our three would have left for Goma on a UN flight. In Africa, it is normal for diplomats, aid workers and journalists to use UN planes. They are often the only ones available and are also the safest. In fact, for logistical reasons (chronic delays) and, above all, for safety reasons (poor maintenance), local companies are sarcastically called Maybe Airilines or Air Peut-être, i.e. “maybe” airlines, depending on whether you are in an English- or French-speaking country.

As the document in our hands shows, the Italian ambassador and his two companions were booked on a UNHAS flight (which stands for United Nations Humanitarian Air Service), normally scheduled as a normal airline flight. It had not been arranged for them. The pilot should therefore have adhered to normal safety protocols.

It is surprising that the Congolese Foreign Ministry followed up the verbal note of the Italian embassy last night with a sharp statement saying that the ambassador, the consul and the carabiniere never showed up at the diplomatic room of N’Djili airport in Kinshasa and that the control officers ‘never saw them boarding’ the flight. 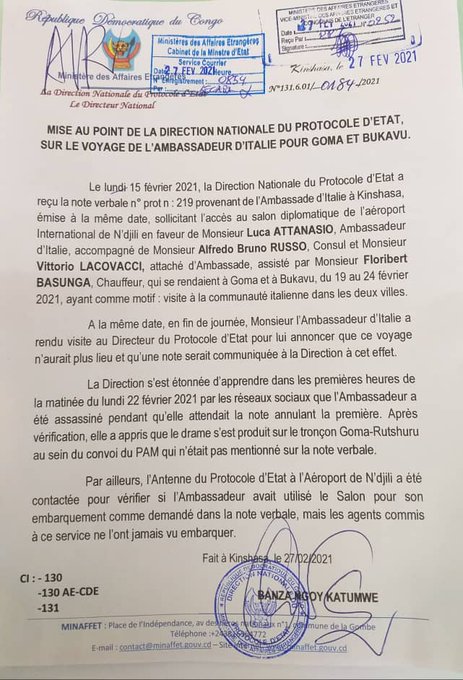 Therefore, the last farewell to Ambassador Luca Attanasio and Carabiniere Vittorio Iacovoni was immediately followed by quarrels and blame-shifting. Blame is bounced around a bit at random in order to shift it away from oneself. It is therefore necessary to clarify some points that appear to have been dealt with confusion and carelessness.

The testimonies agree that Ambassador Attanasio was known for his frankness and attention to the poorest of the Earth and, obviously, in Congo he found many to whom he could turn his attention. The Congolese,’ wrote the Swiss sociologist Jean Zigler a few years ago, ‘are like a poor man sitting on a mountain of gold. Very true. The country is very rich in natural resources, exploited by unscrupulous characters who put their interests before those of the people. They organise and finance armed gangs with the intention of terrorising the population and continuing their often unconfessable business.

But it is not only very rich, it is also very vast: the west (where the capital Kinshasa is located) and the east, the north and the south are very far from each other. With different interests but, above all, fought over by different armed groups. And with different local leaders each thinking of their own survival and personal enrichment. Each has its own private militia, usually dedicated to looting, vandalism, rape, torture and massacre.

The central government pays lip service to controlling the entire territory, but in reality large areas escape its administration. It should also be added that the level of corruption is extremely high and everyone tries to grab a crumb of the country’s wealth, which makes the highest leaders hungry and uncontrollable plutocrats. State employees, teachers, professors, but also – and above all – soldiers and policemen, are not paid and therefore survive by burglarizing the civilian population in order to obtain their denied wages. Violence in the country is widespread.

The video we present here is illuminating: it was shot a few days ago and shows a hill in the village of Birava in South Kivu. The local population has discovered a gold seam above ground. As soon as word spread, people poured onto the small hill and started digging. Shortly afterwards, the police arrived and chased everyone away with guns in their hands. And so the agents took over the mine.

The biggest mistake often made by those who talk about Congo is to consider it a homogeneous country. But it is not. Not only is it large, but it has no means of communication. In fact, the only ‘highway’ is the largely navigable Congo River.

The old dictator Mobutu Sese Seko, who fell in 1997, kept the country on its feet, all things considered, with an iron fist. He meticulously applied the principle of “divide and rule”. He let a few people get richer, so much so that he was as wealthy as the local Scrooge McDuck. He allowed his soldiers freedom to pillage and rape, but sparingly, i.e. without exaggeration.

The genocide in Rwanda (in 1994) sank the country – especially its eastern part – and plunged it even further (if there was ever a need) into hell. The soldiers of the old Rwandan army (mostly Hutu soldiers and officers), defeated at home, fled to the rich former Belgian colony, pursued by the new Tutsi victors, led by Paul Kagame. Now in that strip of territory in eastern Congo, in addition to the bands of traditional may-may warriors, esoteric and steeped in black magic (may-may means water-water because they believe that bullets on contact with their skin turn to water and therefore do not penetrate the body), there are the remnants of the Hutu militia. Then there are the remnants of the Hutu militia, followed by troops of the current Rwandan Tutsi army, groups of the Congo army (theoretically under the orders of the central government in Kinshasa) and finally, according to UN figures, over a hundred small armed bands of irregulars.

The Hutus of the Democratic Front for the Liberation of Rwanda were immediately indicated as the ones responsible for the murder of our ambassador who, despite what the Minister of Foreign Affairs, Luigi Di Maio, claimed, seems to have been the victim of a targeted action. Of course, it was not an execution, if that means “killed by a point-blank shot” (in fact, he was shot from a distance), but the ambush seems to have been prepared for him. In a communiqué sent also to Africa Express, the FDLR has denied it, but there are still too many questions to explain the reason for that odious ambush.

However, we can only hope that the murder of Ambassador Luca Attanasio and Carabiniere Vittorio Iacovacci will not be added to other Italian mysteries.