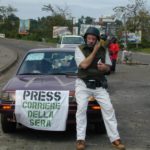 The phone call from Ethiopia arrived suddenly. The voice on the other end is shaky: “They’ve arrested her! They’ve arrested her! And now she’s dying.” Semhal Melles Zenawi, daughter of Ethiopia’s architect, born after the fall of Mengistu Haile Mariam’s communist military regime, is now in jail.

Our interlocutor barely manages to pronounce other brief words: “She was blocked by the military at 1 am while she was in Makallè (the capital of Tigray, ed.). They broke down the door of her lodging and dragged her away: but she was there to take part in a demonstration in memory of her father and she had not been able to go back (to Addis Ababa, ed) because of the ongoing war”. Communication was then interrupted and impossible to re-establish for further details. Only later did a message inform Africa ExPress that Semhal was released at 9 pm.

I met Semhal Melles Zenawi in 2005 in Addis Ababa during the concert in honor and memory of Bob Marley. Her father had introduced her to me together with his wife Azieb. They invited me to enter the place reserved for them and so we watched part of the concert together. The woman, who is 32 years old, somehow took the political legacy of her father, Melles Zenawi, who died in a Brussels clinic in August 2012.

Together with her mother, a former guerrilla leader herself, Semhal has, however, distanced herself from the leadership of the TPLF (Tigray People’s Liberation Front) with whom she was in strong disagreement.

Melles was a visionary who dreamed of a democratic and developed Ethiopia. Perhaps the only true statesman (excluding, of course, Nelson Mandela) that Africa has ever known. He succeeded in an epochal transformation: from guerrilla leader, he became a shrewd and thoughtful politician. His liberal policies have now shattered against the ethnic and tribal selfishness that has tragically emerged with the fratricidal war unleashed by his successor Abyi Ahmed, Nobel Peace Prize 2019.