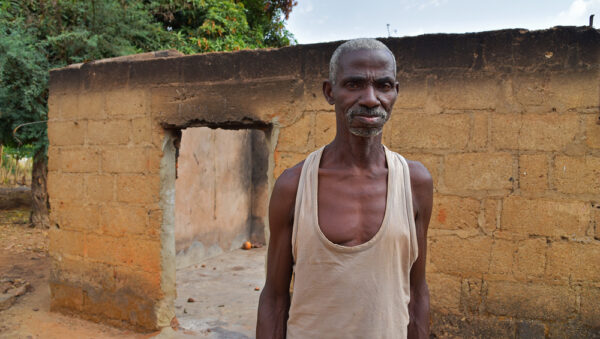 ‘We reasoned that all this running and suffering is not going to end;
the best thing is we should look for peace.’ 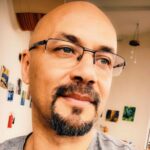 Solomon Magaji can still see what’s left of his home from the opposite bank of the Kaduna River, but he can also see the men who torched it grazing their cattle untroubled on the abandoned fields around his village in northwestern Nigeria.

Magaji, a quietly spoken single father, lost everything in the attack one night in May – so sudden all he had time to do was grab his eight-year-old son and run. “Two of my cousins were killed,” he told The New Humanitarian. “My house, my grain: It was all burnt to ashes.”

No help has come for the roughly 1,500 people scattered by the attack. Instead, survivors are being looked after by friends, relatives, and private charities. They have zero plans to return home: That would require the help of the police to guarantee their safety.

Overstretched, the police justify their inaction by blaming the remoteness of the village, Unguwar Haraha Gofe, and the difficulty of the terrain.

“The government is not doing anything,” said Magaji – a not-so-subtle suggestion that the authorities have little sympathy for opposition-supporting communities in the Southern Kaduna region. “Even if we could go back, all our houses are destroyed. Where would we stay?”

What happened in Unguwar Haraha Gofe has been replicated in scores of villages in Southern Kaduna in recent years. At least 366 people were killed in communal violence in the first seven months of this year alone – deepening the bitterness that has complicated the many attempts to find peace.

This fertile agricultural zone is home to at least 30 ethnic groups – predominantly Christian farming communities. Collectively, they are a minority within Kaduna state, where political and economic power is held by the Hausa-Fulani majority, who are almost exclusively Muslim.

The flashpoint for conflict is typically a dispute between “indigenous” farmers and Fulani pastoralists, who range across West Africa with their herds. The expansion of settled farmland has blocked legally-demarcated stock routes, and when crops have been trampled and water points fouled – or cattle killed or stolen – trouble has quickly followed in a tit-for-tat spiral of ever-worsening violence that has displaced an estimated 50,000 people in recent years.

Jonah Luka has been both victim and culprit. The stocky businessman is from Doka village, where 14 people were killed in a single July attack carried out by men he recognised only as Fulani. What followed was two weeks of reprisals that Luka – after totting up the toll settlement by settlement – calculated had killed over 40 Fulani.

Yet Luka, Doka’s saraki or community leader, has no evidence those killed in revenge had anything to do with the original attack. All he knows is they were Fulani, and because there’s no faith in the state’s corrupt and over-burdened judicial system, that was – for him – enough reason for them to die.

“People’s blood was boiling,” he told TNH. “We had lived peacefully with the Fulani. There was nothing between us. But on the night of the attack, they left without informing us, so we assume they knew the attack was coming.”

The violence in Southern Kaduna increasingly goes beyond ethnic conflict: Old-fashioned banditry has complicated the picture, with a surge in attacks that appear to target anyone and everyone.

Typically, the attackers are young Fulani men who may have lost their own herds to earlier banditry – a body blow in a culture that revolves around cattle. From their accents, many are believed to come from further north, from Nigeria’s poorest state of Zamfara, itself roiled by violence.

The men occupying Magaji’s village, for instance, are Fulani, but he’s sure they are not from his local community. He doesn’t know why they came, only that they are on his land and he is now struggling to find odd jobs to feed his son.

“What is purely criminal is being interpreted along religious and ethnic lines,” said Maurice Amollo, country director of Mercy Corps, an international humanitarian NGO working on conflict resolution in Southern Kaduna.

But that’s little comfort for the communities suffering the sudden attacks, trying to understand why they are victims; why the security forces are failing to protect them; and why the state government isn’t providing them with aid.

Patrick Margai chairs the Kajuru Trust and Reconciliation Committee, which brings together the Adara – the majority ethnic group in the area – and the Fulani and Hausa communities to seek solutions to the conflict.

Ahead of the start of a mediation effort, his committee, supported by the state-appointed Kaduna Peace Commission, has asked community leaders in the Kajuru district to prepare formal position papers to better understand their grievances.

All the papers TNH has seen cite banditry as the overwhelming threat, but that’s where the common understanding ends.

The Adara accept the attacks are by external Fulani “criminals and terrorists” but allege they are abetted by “bad eggs” within the local Fulani community. “The accusation is that they invite the bandits to help them settle scores,” said Margai, a former Adara politician.

For the Fulani in Kajuru, the speed with which that suspicion hardens to accusation, and then retribution, is the problem.

“They always accuse us of knowing about the attacks, but the attacks continue when [we are no longer in the community],” said Yusuf Suleiman of Miyetti Allah Cattle Breeders Association of Nigeria (MACBAN), the main Fulani lobby group.

MACBAN insists its members are the original victims of the violence. It’s now too dangerous to roam any distance with cattle, and more and more Fulani are abandoning the nomadic lifestyle, opting to settle and urging the authorities to set aside land and open schools.

Banditry is an equal opportunities employer. The money to be made means young people in every community are increasingly involved – and perceptions are slowly changing over who is likely to be an outlaw. “There can be informers even within your [Adara] family,” Margai noted.

Communities can unite around that mutual threat, Margai suggested. And the village of Doka is now an example – perhaps a surprising one – of how Adara and Fulani can build bridges to try to overcome divisions and return to co-existence.

It began with the realisation that the tit-for-tat violence had hurt everyone. Markets in the area closed as people became too nervous to mingle, and the local economy – based on livestock and agricultural sales – tumbled.

It’s not clear who had the idea first to reach out in friendship; it seems both Adara and Fulani communities had independently been discussing a peace initiative to find a way out of the impasse.

In their words:  Jonah Luka, businessman from Doka

“We were looking for a solution,” said Luka. “We reasoned that all this running and suffering is not going to end; the best thing is we should look for peace.”

In August, he got a phone call from Amadu Suleiman, the ardo or Fulani community leader in next-door Kasuwan Magani, inviting him to a meeting. “As we talked together, discussing what had happened, both sides agreed to forget, and build a new peace,” Luka told TNH.

At the meeting, it was floated that the Fulani should return to Doka, and that the weekly market should reopen as a sign of unity.

“They gave us security guarantees: that no Fulani man would be harmed; that they should come back with their families and animals,” said MACBAN’s Suleiman, the ardo’s son. “When you hear that, from the people that live in that place, it gives you confidence.”

In the final step to reconciliation, the elders were invited to Doka. The Fulani mosque was swept clean, and community leaders assembled for Friday prayers.

“That sealed the deal,” said Suleiman. “Both sides had discussed what had happened and agreed to forgive and let the issue go.”

Joint community patrols now keep an eye open for anybody that looks suspicious. Armed with just flashlights and machetes, they would be no match for AK-47-wielding assailants. So far, though, there has been no trouble.

Cafra Caino, the Kajuru Local Government Area chairman, swept into his office with a small entourage in tow. He’s not in every day, preferring to spend most of his time in Kaduna, so the sofas lining one wall were filled with people trying to grab his attention.

Young and energetic, he saw the banditry problem as his biggest challenge. He applauded what happened in Doka, but was under no illusion that it was a hyper-local deal in a small corner of Southern Kaduna – Kajuru can’t insulate itself from the broader conflict dynamics.

He estimated that there may be as many as 1,000 bandits, drawn from across northern Nigeria, roaming a vast tract of empty land, taking advantage of poor communications coverage and barely motorable roads.

“No one controls the bush; they control it,” Caino told TNH. “It could have repercussions next year: If farmers keep getting attacked and there’s no farming, then there’s no food.”

He spoke animatedly about the need for military boots on the ground, better intelligence, and the creation of local armed vigilantes. But this is an old, exhausted playbook that has achieved little success in other parts of the country – in Zamfara it made things worse, as vigilante groups started targeting Fulani indiscriminately.

Margai, of the Kajuru peace committee, argued that resolving the crisis will require more than just Adara and Fulani sitting down together. He called for a rural development plan and a state government that is “impartial” – his implication being that the authorities are pro-Fulani.

Suleiman of MACBAN acknowledged those fears. “People don’t have confidence in the government, so we prefer to do this ourselves,” he told TNH. “It must be from the grassroots. We’re the people that can bring peace.”

As Suleiman sat on a wooden bench outside his home in Kasuwan Magani, a neatly dressed man approached. He spoke politely in Hausa, the lingua franca of the north, and left a while later.

“He’s from [the village of] Afogo and he wants to meet with my father,” explained Suleiman. “He wants to speak to him about the Fulani returning: There is not one single Fulani man living there anymore. I think we’ll agree.”