Those who know the geography of Ethiopia know that the Tigray region lies in the far north of the country, on the border with Eritrea. It is a rugged, fascinating land with high mountains and narrow, sunburnt plains for most of the year. Its population is about 7 million inhabitants, more or less the same as in Serbia.

Those who know the recent history of Ethiopia know that during the war of liberation from the dictatorship of Mènghistu Hailé Mariàm the Tigray Peopel’s Liberation Front, (Tigrai Liberation Front,TPLF), fought for decades against the Ethiopian army, the Russians, Cubans and North Koreans. For years the Ethiopian army tried to defeat the guerrillas without success. Among the TPLF guerrillas was also Debretsion Ghebremichael, the current leader of Tigray. 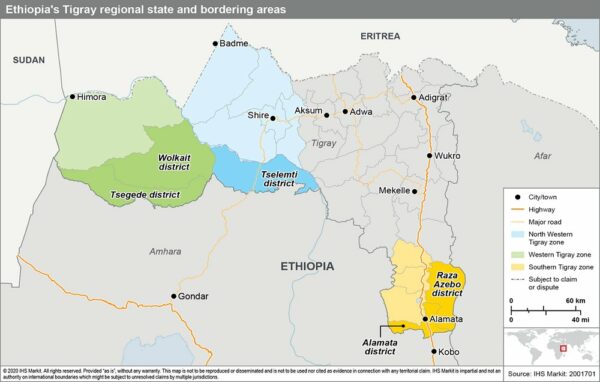 He enlisted in the liberation front in 1970 and today, after a long guerrilla experience, he can count on an army of 250,000 soldiers between soldiers and militia (the Italian army has about 175,000 soldiers in service). It can also count on a fair number of officers, since, until 2018, the Ethiopian army was largely in the hands of tigrinya officers.

A few weeks ago the political conflict between the Tigray region and the central government of the Ethiopian Prime Minister, Abiy Ahmed, led to a bloody new conflict. Immediately communications with the war zones in the north of the country were cut off and the only certain and verifiable news is that of the Tigrinya exiles who, having fled the areas where the conflict raged and crossed the border, reached refugee camps in Sudan. There are now tens of thousands of them, each with its own story of violence to tell.

Other news scarcely verifiable, arrive through international channels, talking about rapid victories and rapid advances of the army of Addis Ababa. The last ones would concern the taking of Adigrat, the second city of the region. Adigrat is located in the far north of Tigrai, opposite the border with Eritrea. It is easy to reach from Eritrea but extremely complicated from Ethiopia. To the east there is the impassable dancala depression and from the south-west it is necessary to cross the whole region, passing through the cities of Adua. Menghistu had not succeeded, it would be a difficult task for any modern army and it seems unlikely, in such a short time, by the present Ethiopian army.

In the meantime, the unverifiable news continues this morning. The 72-hour ultimatum issued by Ethiopian Prime Minister Abiy two days ago did not frighten the TPLF leaders.

While Addis Ababa has asked the Tigray government to surrender peacefully, Tesfaye Ayalew, Ethiopian troop general, has increased the dose and told Fana Broadcasting Corporate, affiliated to the state broadcaster, that there will be no mercy, and has asked civilians to leave Mekellé, the capital of Tigray, while there is still time. It was specified that government troops would be less than 60 kilometres from the city centre.

The TPLF spokesman, Getachew Reda, on the other hand, said in a speech on Tigray TV that their forces would completely destroy the 21st mechanised division of Ethiopian government forces.

In the meantime, the United States has also declared its support for the African Union, which is trying to start a mediation to end the conflict in Tigray.

It is difficult to verify what is really happening in the war zones but it is possible to expect a long and bloody war that the international community would have every interest in avoiding. At the end of the 72 hours that the Ethiopian government has granted for the surrender of the Tigray ruling party, we may know more about what is really happening in that unjustly forgotten area of the world.