Africa ExPress Special Correspondent
Saba Makeda
Juba, 15th July 2016
The eruption of fighting on 7th July 2016 between the Sudanese People’s Liberation Army (SPLA) and the SPLA in Opposition ( SPLA – IO) in  Juba and the huge loss of life and casualties as well as the destruction of properties that it has caused are clearly an indication of flaws of the Compromised Peace Agreement.

Clearly the Compromised Peace Agreement is in tatters and there is an urgent need to address the key shortcoming of the  agreement and in  particular  for IGAD mediators to consider the meaningful  inclusion of diverse voices from South Sudan both political as well as from Civil Society.

At the time, General Peter Gatdet, a hardliner famous for the capture of Bor in the aftermath of  December  2013, was one of the early defectors who rejected the proposal  for the formation of  Transitional Government that included both President Salva Kiir and Riek Machar and consequently vowed to fight both sides. At the time the significance of Gatdet’s defection was downplaid by SPLM-IO.

In August 2015, prior to the singing of the Compromised Peace Agreement, the South Sudan Federal Democratic Party/Soth Sudan Armed Forces (FDP/SSAF) broke away from the Riek  Machar lead Sudan People Liberation Movement – In Oppositions (SPLM – IO). The chairman and commander in chief of FDP/SSAF is H.E. Gabriel Changson Chan, is the former Minister of Youth, Culture and Sports.

The FDP has an armed wing called South Sudan Armed Forces (SSFA) initially lead by General Peter Gatdet. However by April  2016  there was  a formal separation between  FDP and  General  Peter Gatdet  as the latter had formed the National Defence Alliance (NDA). During the same period, reflecting the fluidity and complexity of South Sudan politics, the FDP suffered the defection to the Government of Gen. Gathoth Gatkuoth, Gen. James Malith Gatluak and Brig. Gabriel Gatwech Puoch.

During the negotiation of the Compromised Peace Agreement and in particular in August 2015, matters were not much better on the Government side. Because of these tensions and  dissentions, President Salva Kirr signed the Peace Agreement, with reservations on 26 August  2016, almost 2 weeks after  the  document had been signed by Dr Riek Machar (SPLM-IO) and Mr Pagan Amun –  the reinstated Secretary General of  the SPLM South Sudan  who  signed on behalf of the  former detainees – a group of high ranking politicians briefly jailed in the aftermath of the events of December  2013.

During an interview given to the Sudan Tribune on 11 February 2016, HE Gabriel Changson Chan stated:
“……. Depending on the peace agreement as the basis  of the Transitional Government of National Unity ( TGoNU) without  constitution will lead to failure in the implementation of the peace  agreement. “

“The President will then govern the country with un –amended constitution and shall have the liberty to appoint and dismiss the First Vice President and the cabinet minister because there will be no constitutional  protection for them.

In April 2016, Dr Riek Machar finally arrived in Juba and the Transitional Government of National Unity (TGoNU) was formed.  Though people wanted to hope for the best, the general feeling in Juba  was that the formation of the TGoNu  had simply reset the country in the same position as it was in 2013 with the same  players and tensions in place. 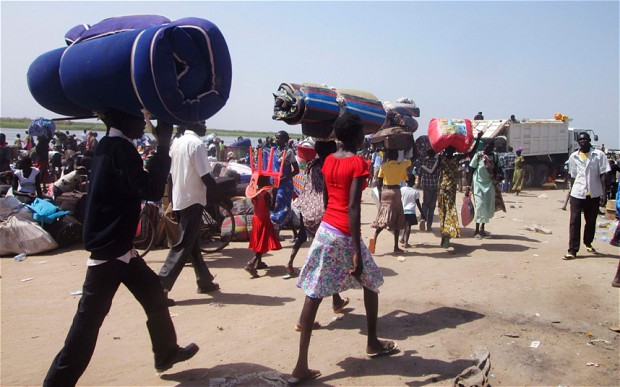 Earlier this month, fighting reminiscent of December 2013 erupted in Juba, causing more than 300 deaths, and the displacement of  over 30,000  people in Juba. In Addition  the fighting  was not restricted to Juba as almost simultaneously armed clashes were reported in Wau, Torit, Bentiu, Lainya, Yei , Kajo Keji. Though it is not possible to say that there was a deliberated coordination it is clear that there was a widening of the conflict throughout South Sudan.

Thought the ceasefire in Juba is most welcome, it is disturbing that: