Government last month issued a permit to a private farmer to shoot a white rhino bull as a trophy worth N$1,4 million (95,000 euro) for a Chinese client.

The permit was granted to the Lamprecht family for a hunt on their private farm in eastern Namibia under the supervision of a senior conservationist from the ministry of environment.

Although the operation was legal, the hunt, which took place on 12 November, has already raised questions from some concerned individuals as to why government continues granting permission for hunting rhinos at a time the country was grappling with the problem of poaching.

Environment minister Pohamba Shifeta was recently quoted in the media saying poaching had not reached crisis levels in Namibia and that the country still has plenty of rhinos.

The current legal quota for rhino hunting in Namibia is five animals per year. Shifeta at the time said Namibia has an estimated more than 2 500 rhinos, with the birth rate per annum of (black and white rhinos) standing at 5% to 6%, compared to a death rate of less than 1,5% per year, including natural mortality and trophy hunting causes.

Professional hunter Jofie Lamprecht of Hunters Namibia Safari said he was granted a permit and that the trophy hunting was done on behalf of his client, a “bona fide international hunter from China.” He said the proceeds from the hunt would go towards the protection of the endangered species.

“Namibia’s white rhino population is thriving and their sustainable use is the only way that rhino owners can generate revenue to cover the very high costs of owning these wonderful creatures currently,” he said in a statement. The Constitution of Namibia formally enshrines ‘the sustainable utilisation of our natural living resources’ – that is the right to hunt.

Spokesperson of the ministry of environment Romeo Muyunda told The Namibian that government normally only hunts two out of the five rhinos permitted per year.

“The rhinos are then auctioned to interested clients and the proceeds go into government coffers,” he said. The ministry said private farmers who want to hunt for rhinos have to undergo a vetting exercise to establish their general knowledge of the species and they should own a registered lodge.

Shifeta yesterday said if the permit was granted by the ministry, then the hunting was justified. He said in most cases, government only grants permission for the hunting of rhinos in areas where the animal population is high. He also said most farmers are only allowed to own white rhinos since black rhinos are not allowed to be privately owned in Namibia.

Namibia’s white rhinos outnumber black rhinos. The Lamprecht family said the particular rhino was hunted out of hundreds of other rhinos in the area. 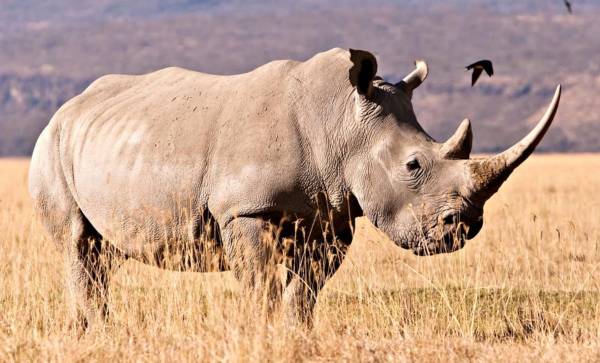 During the recent Convention on International Trade in Endangered Species of Wild Fauna and Flora meeting held in Johannesburg, countries such as Swaziland failed in their attempt to have the controlled trade in harvested rhino horns legalised.

“The only way, in many people’s opinion, that rhinos will have any chance of survival is to legalise a regulated trade in rhino horns. These horns are stockpiled in many African countries with no value, while the live rhinos across Africa are poached for the horn,” said Lamprecht.

He said the sale of live white rhinos has slowed due to the high cost of protecting them as well as feeding them in a drought year like 2016.