The Eritrean Government reaction to the report, predictably has been one of declaring itself and the people of Eritrea as the victims of some global, fiendish plot against Eritrean people and the Eritrean Government. In a recent interview with the Chinese Television, CCTV news , the Eritrean Ambassador to Kenya, Mr Beyene Russom, states that he is Shocked! Bewildered! Stunned!, and finally Confused!. Because the report is very sickening and disgusting, virulent and outrageous in content.

Ambassador Beyene Russom further states:  “We believe that the promotion of human rights is a process, it should not be confrontational as it has been depicted. This is an unwarranted attack against our social fabric our government “The Ambassador omits to mention that the Commission had attempted to engage with the Eritrean Government and particularly had  requested to travel to Eritrea and that in fact the Eritrean Government failed to engage or to respond.

The Eritrean Government is holding on to its siege mentality not only against the Commission’s report but also against the concerns and issues that are being expressed by young Eritreans, it is continuing with the approach that “they know it all” “it is my way or the high way” and that if we the Eritrean people are not in line with that then we are “defeatists and traitors”; or worse we have sold our soul to the twin devils “Ethiopia“, “USA”.

We are continuing with the narrative of Eritrea as victim of USA and other parties’ nefarious agenda in the Horn and at the same time we are not able to have any dialogue amongst ourselves about the Eritrean Government own CIA like involvement, in our name, in Darfur, Somalia, Sudan, South Sudan, Ethiopia, Democratic Republic of Congo, just to name the best known. I guess it takes a thief to know a thief.

The Eritrean Human Rights demonstration happened in Geneva on 26 June 2015 also well attended and by Eritreans in the Diaspora clearly giving a signal to Eritreans back home that their suffering is known to the people in the Diaspora.

The Eritrean Government, in continuing to attempt to discredit: the Eritreans who are telling of their experiences – discrediting their stories rather than taking action to ensure that such things do not continue to happen; the Eritrean Human Right  organisations, as well as the Eritrean opposition (such  as it is ) .

It is ironic that the very Government that is denying Eritreans so many rights, including the right to speak, in Eritrea and many cases threatens Eritreans in host countries, has no problem availing itself of those rights in third countries to deny the Eritreans the rights to their own stories and experiences

As we engage on the human right issues in Eritrea and the situation of our country in general it is important to understand that Commission’s Report is assessing Eritrea against international human right obligations that the Eritrean Government has freely entered into. In other words the standard being applied is not some kind of plot against Eritrea but a standard that the Eritrean Government has agreed to.

Specifically the Eritrean Government has adhered to the following universal and regional human right treaties:

Under the abovementioned human right treaties, the Eritrean Government has the obligation to protect the human rights of the Eritrean people by enacting and enforcing national laws that protect human right. This is not happening and the justification that we are being given is that the country is in state of emergency because of the unresolved border issue with Ethiopia.

The International Convention on Civil and Political rights – Art 4 requires Governments to give notice to the UN of circumstances arising that may require a derogation of certain rights. Article 4 further states that the following rights are non- derogable and must be respected at all times including during emergencies such as the one claimed by the Government of Eritrea:

b)    The prohibition  against  torture or  cruel and inhuman  degrading punishment  (i.e. being jailed for  life and having  no  access to  family,  the beatings,  tying  people in  a figure 8  or  helicopter  position,  overcrowding  and poor  sanitation,  solitary confinement  for  extended period etc.  );

d)    Freedom of thought, conscience and religion (the arrest of journalist, Jehovah witness and other religious groups. The detention of Abune Antonios the head of the Orthodox Church first under house arrest, 2006 to  2007 and now  incommunicado

To date the Eritrean Government has not given any notice to the UN of circumstances arising that require the derogation of the rights of Eritreans. In fact in Eritrea there has never been a curfew nor has there been a formal declaration of a state of emergency. 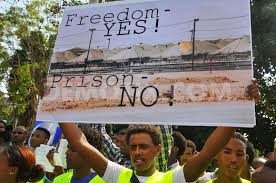 What we do have and continue to have is an Eritrean Government, describing Eritreans telling their stories and voicing their concerns as traitors and generally treating all Eritreans and especially dissenters in a contemptuous manner.

The People Front of Democracy and Justice (PFDJ) has forgotten that all Eritreans love Eritrea and that the land of Eritrea is in our blood and that we have imbibed the essence of this land through our mothers milk, our water, our tea, and our coffee and that this love and connection to the land is higher in the order of things than any connection to the People Front of Democratic Justice (PFDJ). This connection and prioritisation was clearly demonstrated during the war with Ethiopia in 2000, when the young conscripts, the same people that are now protesting and are becoming refugees, disobeyed orders to abandon their posts and held the line in the battle for Assab.

The current contest between us the new generation of Eritreans and the Eritrean Government, is not a denial of our heritage as Eritreans, nor is it a denial of the accomplishments of the generations that have come before us, it is in fact an affirmation of that heritage and our commitment, as Eritreans, to fight against injustice and tyranny, even when that injustice and tyranny is perpetuated by one of our own. Our call is not Victory to the Masses! – for the Eritrean People are not an amorphous entity they are a deliberate coming together of many Peoples. Our call is Victory to the Eritrean People! 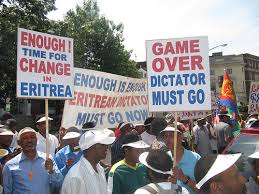 The group of ministers (G15) that tried to do so were arrested in 2001 and have disappeared as have so many after them. As it is not possible to have our voices heard in Eritrea, without being condemned as traitors or worse defeatist we must raise our issues wherever we are – in this also we are following a long tradition.

What we do have is a highly militarised Dergue like dictatorial regime justified on the basis of the continuing “No war; No Peace situation in the country”. After more than thirteen years of the current highly militarised hard line policy toward Ethiopia it must be clear that it is  not working and that it is not getting us what we want – Ethiopia out of Bademe, normalisation of relationships, including trade, with Ethiopia.

According to Albert Einstein insanity is “when we keep doing the same thing over and over again and we expect different results”. The continuation of the current Eritrean militarised hard line policy not only with Ethiopia but also with its own People fits this definition of insanity. It is time to change.