Massimo A. Alberizzi
Nairobi, 18 November 2013
On desks of the Italian Embassy in Addis Ababa are more than 700 requests of entry visas. Most of them are from Eritrean citizens – escaping from the ordeal of their country. Just a few of them will have an entry-visa. The orders from Rome are clear and severe: Closed. No entry. The well informed people know what will happen : most of those migrants are going to cross the sea in Libya, direction Italy.

Italian authorities should get it that people fleeing from Eritrea do non seek better jobs in a country – Italy – where fun and quality of life resemble that of TV sit coms. Eritrea is NOT Albania, young Eritreans leave their homes because they have become impossible to live in. There, they are certain to end up in a military camp (Sawa) where very often girls are abused and held like slaves to serve sergeants. And you never know when (and if) they let you leave the camp.

Before the 30-years-long war for independence, until 1991, Eritrea was promised to become paradise on earth. People’s Front for Democracy and Justice and their leader Isaias Afeworky betrayed the spirit of that revolution. They not only betrayed the Eritrean people who had believed in those promises but also friends, journalists, human rights defenders, ONG’s; all of them fell into the trap set by a barker whose insanity destroyed an entire nation. 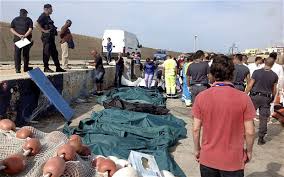 Hope is that the latest tragedies in the Mediterranean sea and sacrifices of human life at search of liberty at least help those who stay there and those who will for sure try to flee in the (near) future. At least, European governments are becoming aware that refoulement does not work and only improves regimes. For the first time in years that world leaders are becoming aware of who is governing in the former Italian colony.

And maybe that is the reason for dictator Isaias Afeworky to feel encircled and insecure. In addition, Isaias Afeworky well remembers what had happened on January 21st: a group of military men on tanks assaulted the Ministry of Information and requested that Constitution be applied and political prisoners be released. They surrendered and ended up in prison. But discontent is spreading within military, Isaias Afeworky fears revolt or coup d’etat.

As a matter of fact, he lately completely replaced his body guards, trustworthy family members, with reliable Ethiopian militants of the TPDM (an organization that he had founded on purpose and incited against the Government of Addis Ababa.

These are people who stop young men in the streets to ask them for their military badges, and put them in prison if they don’t have one. They use the Tigrign term “tessera” that derives from Italian instead of the Tigrin term “mewasawesi” for the same thing. The two languages, Tigrign and Tigrin are almost the same, but for the small differences like this (the different term used) Isaias’ troupes were easily recognizable.
Eritrea’s isolation is becoming even more enforced after Lufthansa has suspended flights to Asmara on October 26. Due to hyperinflation of the local Nafka, Lufthansa had asked for payments in US$, the government denied and thus Lufthansa closed down without even carrying home the bodies of migrants drown before Lampedusa.

After November 22, also Eritrean Airlines will suspend flights; their aircraft are old and need constant maintenance and the Pakistani contractor for aircraft maintenance fled with the firm’s money, a major offense for a dictator who does not tolerate to be betrayed.

African Union had set November 3rd as the mourning day for the victims of Lampedusa. It was celebrated throughout Africa, also in Mauritania, as mrs Carla Leone reported here, but not so in Eritrea.

Tragedies of Lampedusa and Malta are nothing less than the tip of the iceberg. People of what used to be Italy’s beloved colony, before WW II second most industrialized country of the continent after South Africa, are dying. Their prisons are packed with intellectuals, students, journalists, former heroes of the liberation and, of course, ordinary citizens.

To date, all appeals to world leaders to look at these slaughters remain unheard. World classification of repressive regimes list Eritrea at the same level as North Korea. The man who has promised freedom and prosperity turned into a merciless tyrant, so far without concern by any world leader. A wall of indifference that, maybe and hopefully, is being pulled down through Lampedusa’s sacrifices.