SPECIAL FOR AFEX
Cornelia I. Tolgyes
Dear all. My name is Robiel, well, it was my name. Now I’m dead, drowned near Calais (France). Now I tell you my story. I am born 25 years ago in Eritrea. I’m the oldest of 3 children. My sister is 21. She lives now in Israel after being kidnapped in the Sinai. Now she is fine. My little brother, instead, is quite blind on one eye for a stupid accident. That’s one of the reasons why I escaped from my country. I wanted to help him, but also to avoid our terrible military service.

I left everything and I put all my goods and my memories into a plastic bag and reach Libya. There, I was in prison for a while. It was terrible. After being freed, I went to the first harbor and I was so happy to find a skipper who told me: “Be ready, we are leaving for Italy within few days.” I closed my eyes and started to dream. During the trip I felt in love with an Ethiopian girl. And we started dreaming together. 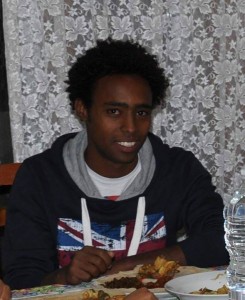 We have spent several months in a refugee’s center and once the papers were ready, I left to the North of Italy, to my cousin and her family, while my girlfriend was transferred to another center, in Rome. I spent about 5 months with my cousin and during this time I met my girlfriend only once, but we use to phone each other and we still dreamed together.

One day I left for France to see some friends. They were working there and talking fine about this country. A few days later, I transferred to Calais. I wanted to go to my uncle who is living and working in UK. He is also a refugee who escaped from Eritrea, our loved country which was a paradise and became a hell.

In October 9th, a cold and windy evening, I was swimming in the Channel near Calais.

They tried to throw me a rope. I remember my desperation, then nothing. Please give my mother my best wishes for the future. The rest of my story will be narrated by Roberta (my cousin) and Cornelia (her friend) who were looking for me. Many young refugees are dying in the Channel, all of them are lying on the seabed, without a name. My story is part of the whole story. The difference is that my story will be told and finally everybody will know what’s happening here.