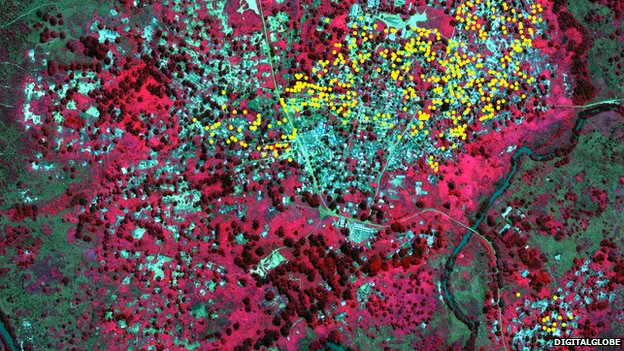 From Amnesty International
10th November 2013
Expert analysis of new satellite imagery Amnesty International has obtained from the Central African Republic (CAR) reveals the shocking aftermath of recent human rights abuses amid spiralling violence by armed groups and security forces. The images – some taken since the beginning of November – include evidence of 485 homes being torched in Bouca as well as internally displaced persons (IDPs) massing near the town of Bossangoa as people flee the ongoing violence.

“These new images offer a glimpse of physical scarring to homes and civic life visible from space, but the true scale of the human impact of the crisis cannot be captured by satellite,” said Aster van Kregten, Deputy Africa Programme Director at Amnesty International.

“The national authorities and international community must act, as a matter of utmost urgency, to rein in the armed groups responsible for the widespread human rights abuses – which may amount to crimes against humanity – that have seized Central African Republic.”

On 9 September 2013, armed civilians known locally as Anti Balaka attacked a Muslim neighbourhood in the town of Bouca, 98 km east of Bossangoa. They killed at least three people and set fire to houses belonging to Muslims. 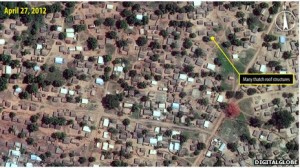 On the same day, Seleka – the coalition of armed groups which seized power in March after launching an offensive against former President Francois Bozizé last December – carried out reprisal attacks on Christians. They killed at least 10 people and burned houses belonging to Christians. Later that day, a Christian humanitarian worker employed by the government was accused of involvement in the attacks and summarily executed by a Seleka commander.

A comparison of satellite images of Bouca taken on 27 April 2012 and 2 November 2013 reveals significant fire damage in central and eastern parts of the town, affecting approximately 485 houses, leaving a large area severely damaged.

Insecurity is further fuelling a growing displacement crisis, exacerbated since the escalation of armed conflict in December 2012. Several hundreds of thousands of civilians have been displaced while more than 60,000 Central Africans have fled to neighbouring countries. 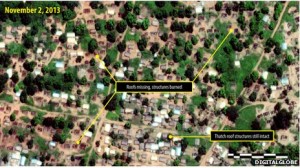 According to humanitarian sources in the CAR, there were more than 30,000 IDPs in Bossangoa as a result of fighting which started in September this year. Satellite imagery from the area from 23 October shows the emergence of tent-like structures and people sheltering in the open. Out of concerns for the safety of these IDPs, Amnesty International is not publishing these recent images at this point.

The new satellite imagery corroborates the findings in an Amnesty International report issued last week. CAR: Human rights crisis spiralling out of control highlighted the unprecedented scale of human rights violations committed across the country by Seleka, the coalition of armed groups which launched an offensive against former President Francois Bozizé in early December 2012 and seized power in March 2013.

Since December 2012, hundreds of civilians have been deliberately killed while thousands have been subjected to torture and other forms of cruel, inhuman or degrading treatment, including rape and other forms of sexual violence. Some of the abuses appear to be targeted at religious groups, with predominantly Muslim members of Seleka targeting churches and people they believe to be Christians. Meanwhile, Christian militia around the country are targeting Muslims.

The organization called on the CAR authorities to publically and unequivocally condemn all human rights violations committed by all security forces and armed groups, and to bring perpetrators to justice and provide reparations for the victims. The African Union and United Nations must also do more to ensure effective and coordinated measures are taken to protect civilians and establish law and order in the country, to finally put an end to this devastating human rights and humanitarian crisis.

“This violence has been allowed to escalate for too long and has already spiralled out of control. Much more needs to be done to ensure that Central African civilians are effectively protected,” said Aster van Kregten.

In the pictures.
1 – In this false colour satellite image of the northern CAR town of Bouca, yellow dots represent structures which Amnesty says appear to have been burned
2 – Amnesty International says this image shows the Bouca area before the attack
3 – A satellite image of the same location, taken after the reported attack in September, shows buildings which appear to have been burned, Amnesty says