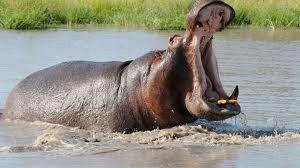 A stray hippo from the Sabaki River Delta in Kilifi County today kept hundreds of italian tourists and members of the public away from the Silversands Beach for hours. Hotel managements were forced to warn their guests against venturing into the popular beach adjacent some of the most popular tourist class hotels in Malindi and Malindi Marine Park.

It took the Kenya Wildlife Service armed marine park rangers under the command of the Armstrong Ngeywa-officer in charge- in two speed boats more than six hours to trace the hippo in the shallow waters of the Indian Ocean where it kept on changing positions forcing the rangers to at times shot several times. 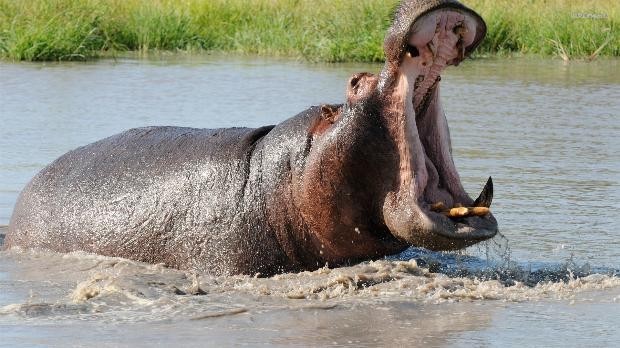 At one time the hippo evaded the rangers who had nearly closed on it in a deep section of the waters of the Indian Ocean close the Scorpio Villas beach shoreline just for it to emerge more than 500 nautical metres away from the rangers who were caught unawares.

Malindi fisherman Ahmed Ali alerted the rangers of the hippo’s position as he sailed near the submerged mammal which attempted to emerge from the water to breath after remaining under the water for nearly 30 minutes.

The rangers quickly sailed into the area where the canoe fisherman had seen the hippo just in time to find it emerge to breathe when two rangers shot at it killing it instantly.

Members of the public who kept vigil for more than six hours after majority had tired of waiting for the meat from the hippo had their last smile after getting at least five kilograms of meat each.

“Ah I am very happy, at least I have gotten more than five kilograms of meat and my family will be very happy today as they enjoy hippo meat” said a joyful and smiling Joseph Karisa, a beach operator who works at the Tropical Village Hotel beach.

Early morning fitness and jogging enthusiastic reported to having come face to face with the mature hippopotamus which could have either been pushed into the Indian Ocean by strong tidal waves after entering the sea through the Sabaki River Delta or walked along the beach on the south..

Malindi based Italian government adviser on foreigners living in Malindi Mr. Roberto Macrì said he had received information that a huge hippopatums was walking along the Silversands beach from Italian residents who usually walk along the beach at dawn everyday for fitness purposes.

“I received information from some Italian joggers that a hippo was strolling along the shallow waters of the Indian Ocean who also indicated that the KWS rangers had also arrived at the scene and started to pursue the mammal” said Mr. Macri.

Mr. Macrì initially hoped that the hippo would be contained and perhaps returned to the Sabaki River which hosts hundreds of the mammals especially close to the River’s delta.

The secretary of the Kilifi County Beach Management Unit (BMU) Mr. Salim Ali who arrived at the beach as soon as reports started spreading about the hippo’s presence said at one time the KWS rangers nearly shot the hippo right at the shoreline but the beast swam back into the Indian Ocean

Hundreds of tourists and members of the public seeking a swimming outing at the Silversands Beach in Malindi in Kilifi County were forced to keep away from the Indian Ocean as fears grew that the animal could attack revelers.

But as the armed KWS rangers struggled through the rough waters of the Indian Ocean to reach the hippo and shot it hundreds of tourists and Malindi residents poured into the beach curious to see the beast.

Majority of the residents of Malindi waited in anticipation that the KWS rangers would abandon the meat to them after killing the hippo. Some arrived with knives and plastic paper bags ready to cut their share of the meat and eventually take it home.

At one time the members of the public who stayed at strategic positions at the beach some patched at some coral outcrops near the Scorpio Villas Hotel even formed a committee to eventually share the meet once the KWS rangers felled it.

However, eventually the tourists and members of the public got disappointed that they could not clearly see the hippo because it was shot and killed in the slightly deep waters of the Ocean and had to towed to the Malindi marine park some 20 nautical miles away to be slaughtered and distributed to the members of the public.

Hundreds of members of the public including women and children walked some five kilometers into the marine park area seeking to be allowed to access the mammal which had been tied into the KWS patrol boat but still remained submerged into the water of the Indian Ocean for several hours.

A senior KWS officer not allowed to talk to the Press explained that the rangers decided to tow the body of the mammal to the Marine to avoid attracting a commission and violence in front of tourists if the members of the public decided to share the meat.

The rangers were eventually forced to wait for more than three hours until the high tide could allow the boat towing the felled animal sail closer to the shoreline for the animal to be slaughtered and the meat shared out.

Hundreds of people had waited patiently for hours to have the hippo slaughtered so that there could get a share of the meat. Mr. Ngeywa said the decision to kill the hippo was out of fears that if left in the shallow waters of the Indian Ocean it could have turned violent and perhaps even attacked tourists or members of the public.

“We feared that the Hippo could have turned dangerous to the tourists and members of the public and for that reason we decided to kill it” said Mr. Ngeywa.