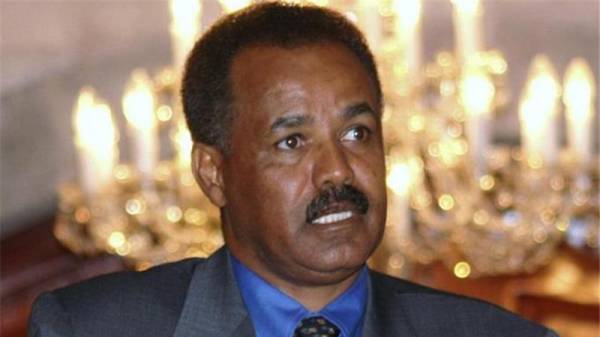 This morning I walked past a group of young Eritreans on the cusp of manhood squatting on a street corner huddled close together talking. One had his back to me. He was wearing a black T shirt with the following words written in bright yellow: SOMETHING IS HAPPENING HERE.

As I passed him I smiled remembering these lyrics from a Buffalo Springfield song of the 1960’s:

“There is something happening here

What it is ain’t exactly clear….”

Once again the disappearance of President Isaias Afewerki from the national media in combination with his failure to attend international events such as the India-Africa Summit have fuelled the usual rounds of rumours as to his whereabouts and specifically his health. Freedom Friday (Arbi Harinet) a movement committed to peaceful resistance and sharing of information has reported that in fact in Asmara (the capital city ) nothing out of the ordinary is happening

The President has recently re-appeared on EriTv and we are all glued to the pictures and commenting on how he looks . We are missing the point!!!

It is a fact that the President has serious health problems for which he is receiving treatment in Qatar and other capital cities. Reliable sources are reporting that in the health of the President is deteriorating and that doctors are not able to do much more to sustain him.

This fact in the current context of Eritrea is problematic, as his iron fist rule has a created a situation where it is not clear to the people of Eritrea who will govern after the President or how such a person would be chosen. All that the people are left with are rumours, suspicion,fear.

In such situation it is natural and understandable that Eritreans feel apprehensive as to the health of the President and his capacity to govern and that there is much speculation and talk as to what is next. Fuelling the apprehension is a very real concern of the possibility that the sudden absence of President Isaias Afeworki could result in a military power struggle to settle the issue of who will govern next as well as provide an opportunity for revenge by those aggrieved by the current regime.

Reliable sources are telling me that in fact the present the situation in Eritrea is more complicated and that in fact we may be posed at a historical turning point, whereby with good will and cooperation it may be possible to avoid a bloody power struggle. In this regard we not that the political and humanitarian dynamic of the Eritrean leadership in the diaspora is changing, that they are meeting and reaching consensus on the need to work together, they are starting to engage more with the younger generation and there are reports that they are linking with people inside the country.

At this point the key questions are:
(a)are we ready?;
(b) when the transition comes will we mange to prevent power struggle and violence?
(c)will we be mature enough as a people to ensure that the next leader does not become an other dictator?

More testing and interesting times coming up for Eritrea. Possible change. As I say this I am well aware that it is almost the end of the year and that this is then time when we as Eritreans start to tell each other: “Things will change next year” “Next Year it will be better”

I just want to say: Something is happening here .