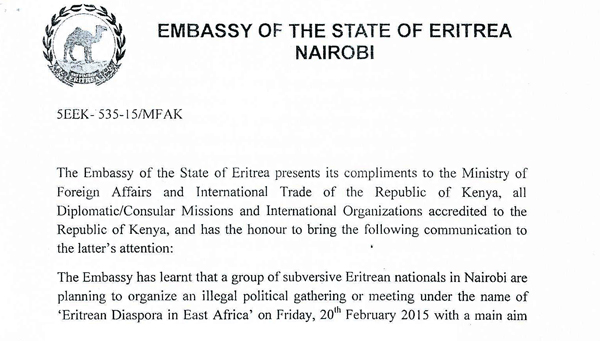 African ExPress through its own reliable sources was able to obtain a copy of the letter written by the Eritrean Embassy to Diplomatic Community in Kenya.

I have viewed the letter and have found it to be  very revealing as to the attitude of the Eritrean Government towards its citizens and   provides glimpse of what the restrictions and the harassment that are applied to Eritreans in Eritrea. 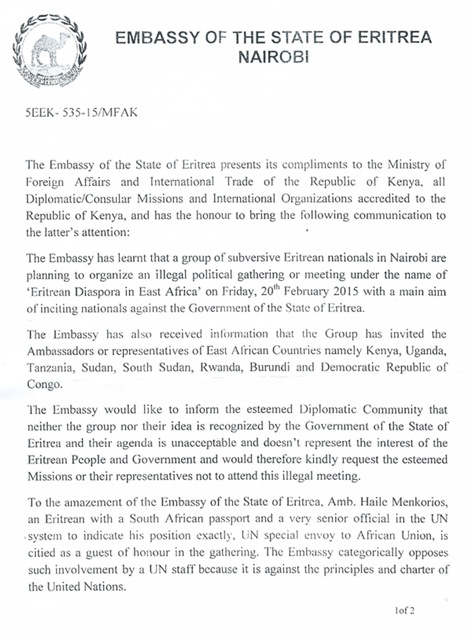 The letter:
“The Embassy  has learn that a group of  subversive Eritreans  national  in Naiorbi  are planning  to organise an illegal  political gathering or meeting under the name of  “Eritrean Diaspora in East Africa” on  Friday  20th February 2015 with a main aim of inciting national  against the Government of the State of Eritrea”

Saba Makeda:
The meeting organised by the Eritrean Diaspora in East Africa (EDEA) was not illegal in  Kenya. The organisation is registered in Kenya and in fact Kenyan officials were invited to attend.  Therefore the reference to illegality can only be reconciled with the fact that the EDEA was organised by Eritrean citizens independently of the Eritrean Embassy or the Eritrean Government. The objection is to Eritreans exercising, in the host country, the right of free assembly and free speech.  These are rights that at present Eritreans are not able to exercise in Eritrea and are often intimidated so as to not to exercise the rights in host  countries. . The message is that  Eritreans who  want to  exercise their  right to  meet and discuss  issues independently of  the Government suddenly lose their  status of Eritrean  Citizens  and  become  Subversive Nationals.

The letter:
The Embassy has also received information that the Group has invited the Ambassadors or representatives of East African Countries namely Kenya, Uganda, Tanzania, Sudan, South Sudan, Rwanda Burundi and Democratic Republic of Congo.

SM:
The letter fails to mention, that in fact the Eritrean Embassy was invited to attend.  It was the choice of the Eritrean Embassy to embark in a process of intimidation and threats and to silence the process thus eminently demonstrating the nature of the Eritrean Government and the difficulties faced by Eritreans who want to engage and   openly exercise their rights and have their real concerns heard.

Given the plight of the Eritrean Youth  and the fact that  presently there are Eritreans seeking asylum  in Angola, Namibia, Ethiopia,  Egypt, Libya, Israel , Europe ;  it can be  argues that . The situation of Eritreans in the diaspora and specifically that of young  Eritreans is desperate enough  that more  diplomats and  representatives of such  organisations as UNHCR, Danish Refugee Council, and ICRC could have been invited.

Because it is not an  agenda of the Government of Eritrea, Eritreans are not e not allowed to talk about the fact that many of our young  Eritreans are moving or are  being  moved into  areas that are  now heavily influenced by the ISIS  agenda . We are not allowed to discuss   or find solutions for the problem that many of our youth may be killed and others again may be enticed to join ISIS.  Surely we should not await for the permission of the Government of Eritrea address these issues . Surely we should lead.

The letter:
To the amazement of the Embassy of the State of Eritrea, Amb Haile Menkerious and Eritrean with South African passport and a very senior official in the UN system to indicate his position exactly. UN special envoy to African Union, is cited as a guest of honour in the gathering. The Embassy categorically opposes such involvement by a UN staff because it is against the principles and charter of the United Nations. 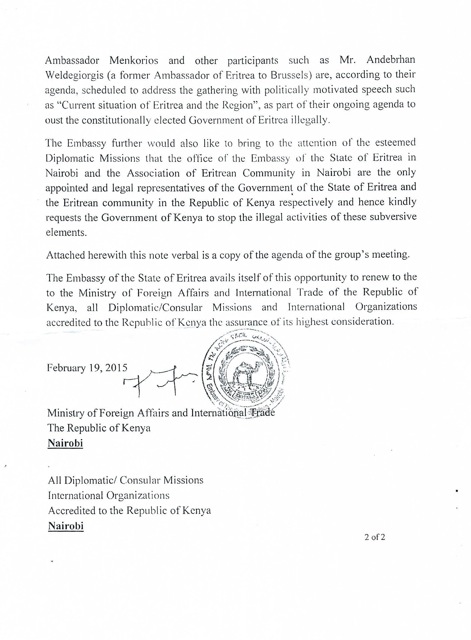 SM:
The letter is disingenuous. Ambassador Haile Menkerious is one of the Group of  15  who in  in 2001 had  dared to hold the Government to  task and to account on such issues as accountability, implementation of the constitution,  hearing the voices of the people. For the request of accountability and to listen to the voices of the People, the members of G 15 have disappeared and or are in exile. Lest we forget the G15 are:

Ambassador Haile Menkerious is a South African citizen, because the Eritrean Government has pursued a policy of persecution so as to render him stateless a situation  remedied by South Africa

The letter:
Ambassador  Menkerios and other participants such as Mr Andebrhan Weldegiorgis (a former Ambassador of Eritrea to Brussels)  are , according to their  agenda, scheduled to  address the gathering with politically motivated  speech sucha  as “ Current situation in Eritrea and the Region” as part of their ongoing agenda to oust the constitutionally elected Government of Eritrea illegally”

The statement made above is not correct. According to the agenda of the meeting the only person  that was to speak on the issue of “Current  situation in Eritrea and the Region” was  Ambassador  Andebrhan  Weldgiorgis  who also happens to be  Adjunct Professor  – Diplomacy and African Studies at the Vesalius College  Brussels.

The statement is also incorrect in referring to the current Government of Eritrea as “constitutionally elected”.  Since the 1992 independence referendum there has been no election in Eritrea to elect either the President or the Parliament. Therefore the current Government can’t be referred to as constitutionally elected. It is not logical  for the  same entity that continuously asserts that the constitution is not implemented and  worst that the constitution is “ Dead” to  then  rely on the same instrument for its legitimacy;

The letter:
The Embassy further would also like to bring to the attention of the esteemed Diplomatic Missions that the office of the Embassy of the State of Eritrea in Nairobi and the Association of Eritrean Community in Nairobi are the only appointed and legal representatives of the Government of the State of Eritrea and the Eritrean Community in the Republic of Kenya respectively and hence kindly request the Government of Kenya to stop the illegal activities of these subversive elements.