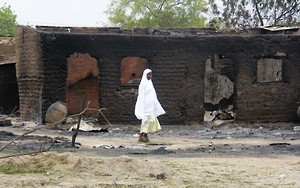 A woman walks past burnt houses in the aftermath of what Nigerian authorities said was heavy fighting between security forces and Islamist militants in Baga, a fishing town on the shores of Lake Chad, adjacent to the Chadian border, April 21, 2013. The bloody gun battle against Islamist insurgents in Nigeria last week involved forces from neighbouring Chad and Niger, officials said on Tuesday, as West African countries increasingly view jihadist groups as a cross-border threat. There was no confirmation of the death toll from Friday’s fighting, but a Nigerian military source said dozens may have died, many of them civilians. The Nigerian Red Cross said it was checking reports from locals that 187 people had died, but had still not obtained security clearance to go into Baga. Picture taken April 21, 2013. REUTERS/Stringer (NIGERIA – Tags: CIVIL UNREST POLITICS) – RTXZ0PR